Towards the end of the Second World War Brenda Rawnsley and her husband Derek had the idea of bringing contemporary art to young children who would otherwise not have had the opportunity to see ‘good’ work. Within a few years Brenda had set up School Prints Ltd to sell original lithographs to schools and had commissioned several of the most important living artists for her scheme.

Brenda Rawnsley sought the advice and assistance of the art historian Herbert Read and between them they chose the artists. The printing was undertaken by the Baynard Press from stones or zinc plates drawn by the artists, who were asked to use no more than six colours. The prints, being original lithographs, were often the first real art seen by young people of that period and are typical of their time.

A cache of a number of these original lithographs was discovered, in mint condition, a full sixty years after they were editioned.

View cart “X1656 Minnesota by Adolf Dehn” has been added to your cart. 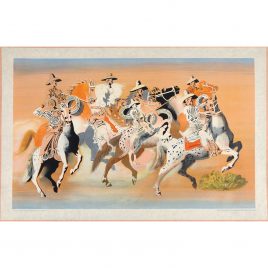 Original lithograph from the ‘School Prints’ Series printed by the Baynard Press in the 1940s. By Buk Ulreich   Conservation mounted and framed with UV protective glass to prevent fading Image size: 75cm x 48cm Outside frame size: 93cm x 67cm   Ulreich was born in Hungary, but his family emigrated the same year to America. He studied at the Kansas City Art Institute and the Pennsylvania Fine Arts Academy. A noted muralist, he produced work for the Chicago World Fair and for the Radio City Music Hall. He also worked as an illustrator and an interior designer for major public buildings. As an artist he seems to have drawn his subjects from the Wild West and in 1941 he illustrated a children's book on Navaho Indians. Arizona Cowboys seems typical of his work both in subject matter and in being in the decorative style of a muralist and interior designer. 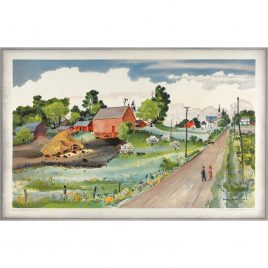 Original lithograph from the ‘School Prints’ Series printed by the Baynard Press in the 1940s. By Adolf Dehn   Conservation mounted and framed with UV protective glass to prevent fading Image size: 75cm x 48cm Outside frame size: 93cm x 67cm   Dehn studied at the Minnesota School of Art (1914) and won a scholarship to the Art Students League in New York. In the twenties he drifted about Europe supporting himself through his lithography. He returned to America in 1929 and by the mid-thirties was drawing caricatures for New Yorker, Vogue etc. Parallel to this he was developing his lithography and became a leading American exponent of the medium. (1987, Jocelyn Lumadaine & Thomas O’Sullivan, The Prints of Adolf Dehn: A Catalogue Raisonné, Minnesota Historical Society.