We will also be showing work by some artists who are new to Churchgate Gallery;- Sally Muir, Cornelia O’Donovan, Liz Vibert and Ann Farley. Here is a taster of some of the work we will be exhibiting, check back during the coming weeks for more previews! 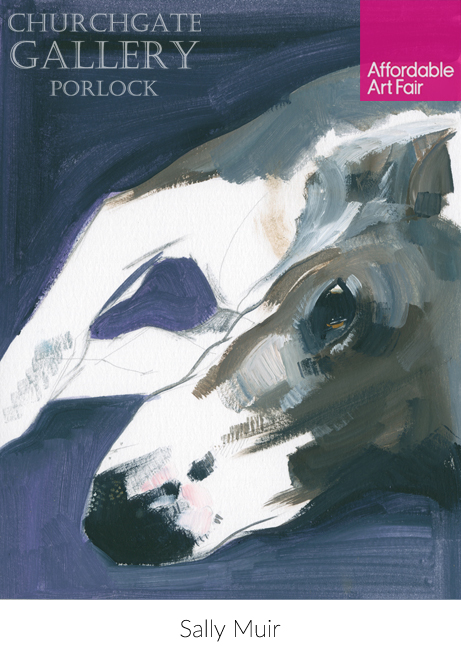 Sally Muir has a rare ability to capture character and personality in her portraits of dogs and other animals. The confident way she uses bold, minimal colour and line perfectly captures  movement and behaviour in captivating way.

As well as working as an Artist, Sally is half of the creative knitwear design duo ‘Muir and Osbourne’, who among other titles published the hugely successful ‘Best in Show – How to Knit Your Own Dog’.

Sally Muir’s paintings and drawings have been exhibited widely across the UK, including solo shows at Anthropologie in London in 2013 and 2014, The Royal West of England Academy and Bath Society of Arists. She has also had her work featured in ‘The Book of the Dog’ by Laurence King publishing. In 2010 she won the Holburne Portrait Prize with her portrait of comedian Bill Bailey and his pet cat.

Liz Vibert is a self taught artist, whose intriguing figurative paintings are informed by her previous career as a novelist. Her enigmatic scenes have a strong sense of narrative, and are reminiscent of dreams and the subconscious. Her Naïve style and use of motifs from mythology shows the influence of symbolism and ruralism on her work.

Liz’s work has been exhibited widely across the UK, including the Royal Academy Summer Exhibition, the Royal West of England Academy, the Portal Gallery and Sweetwaters Gallery London, the Theatre Royal Bath, the Primavera Gallery Cambridge and the South West Academy of Fine and Applied Art Exeter. She has also won several awards, including the Dawn Sidoli Prize at the Clifton Arts Club Open Exhibition 2009, and overall winner at the Salisbury Art Care Exhibition

We have recently been accepted to offer Own Art,  an Arts Council supported scheme that allows you to purchase an artwork  between £100 and £2500 by spreading the cost interest free over 10 monthly payments. We are thrilled to be able to offer this scheme to customers in our gallery, on our website and at Bristol Affordable art fair. Own Art can be used for any original artwork, including original prints making it a fantastic way for a first time buyer to start a collection.