Sue Onley was born in Southampton where both her mother and father were professional cartographers.

She attended Southampton Art College and later worked at Oxford University as an archaeological draughtswoman.

After extensive travels to and periods of residence in various parts of the world, including New Zealand, Greece, the USA and Northern Europe she settled in West Somerset.

Throughout her travels she found inspiration in the huge variety of landscapes which motivated her to create different styles of painting and printing.

These were eventually honed into a more recognisable style in the 1980’s when she attended Bristol College of Art to take part in a three year course which earned her a degree in fine arts.

Since then Sue has continued to paint and create coloured etchings and has had several highly successful private exhibitions. She lives in West Somerset with her partner and their two children – and says the hills and seascapes of the region are her greatest inspiration.

C2901 Behind the Lighthouse -Sue Onley 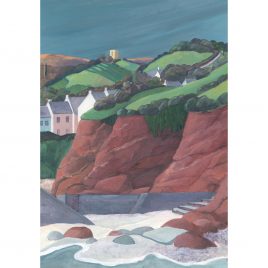