“Art was my favourite subject at school and as a very young child I had a painting exhibited in the junior section of the Royal Academy. When I was 16 I became the last model of the Polish Expressionist Henryk Gotlib.

As a child I was fascinated by the landscape. In Sussex I explored tracks and woodlands, built camps in secret wildernesses and made endless collections of wild flowers, fungi and rotting wood: and I painted.

When I left school I trained as an actress and my acting course was combined with a Dip Ed. in Speech & Drama. My first job was at the Northcott Theatre in Exeter. Apart from shows in the theatre, a number of months were spent researching and writing and then touring and performing on Dartmoor in the Theatre-in-Education Dept: and I painted.

I then joined the Dark & Light Theatre in Brixton and spent an extraordinary few years touring. A memorable performance as Golden Delicious to Eddy Grant’s King Cobra is indelibly fixed in my memory – it was the time of the Brixton riots! Later I spent some time in pub and restaurant management and then with my husband in our own sign manufacturing company. In 1990, we moved from Surrey to Somerset with our 3 daughters. I built a garden in 4 acres and set up a small plant nursery in the tiny hamlet of Payton for a number of years. I felt as if I had come home. I started to paint in earnest.

I have now been painting full-time since 2000. I work primarily in oils and watercolour and occasionally with acrylics and mixed media.I’m a landscape painter. My inspiration is the landscape itself – what I see – or choose to see and I often work on site, particularly when using watercolour.” 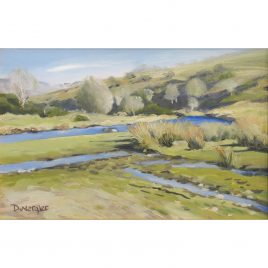