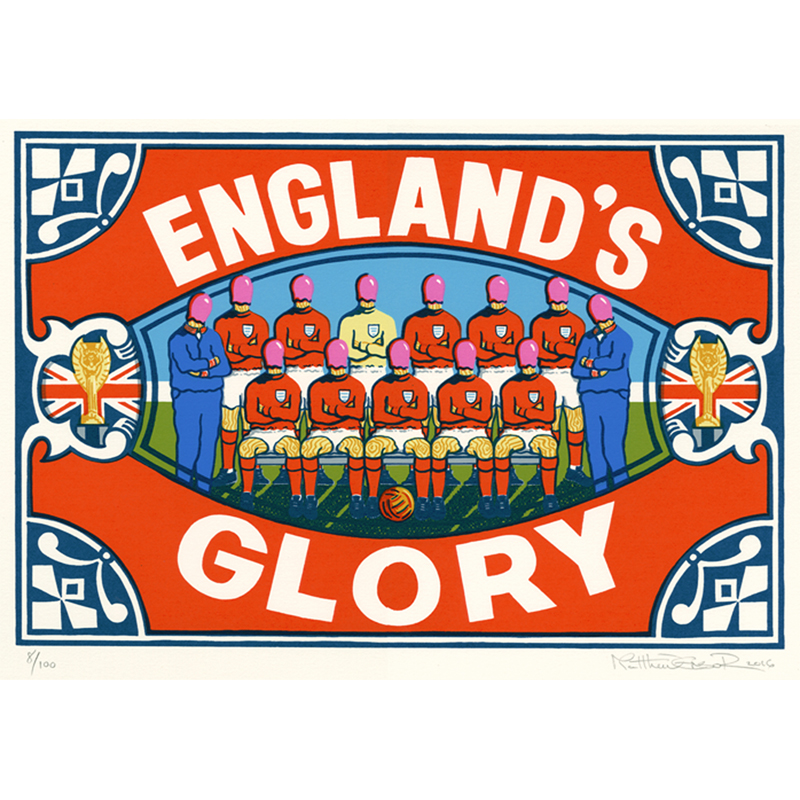 To coincide with the 50th anniversary of England winning the World Cup on the 30th July 1966, Matthew Ensor has produced ‘England’s Glory’ a silkscreen print limited to 100 copies and signed by the artist

Matthew Ensor’s entire childhood revolved around football. The youngest of three ‘football mad’ brothers whose father played for West Bromwich Albion, Matthew played semi-professional football for a short time and it was not long before his two passions,football and art combined

Studying at Birmingham, Leeds, and The Slade School of Fine Art, Matthew Ensor’s reputation continues to grow with examples of his work in many public and private collections, including The Glasgow Gallery of Modern Art, The Professional Footballers Association, The Pamela Stephenson/Billy Connolly Collection and the National Footbal Mueseum .A former printer, sign writer, toy designer, illustrator, and Senior Lecturer in Art and Design, Ensor now exhibits his work with galleries and art fairs throughout Europe.

” ‘England’s Glory’ is an iconic and witty work by artist Matthew Ensor. Revealing his Pop Art and Surrealist credentials, Ensor’s ‘England’s Glory’ takes the ubiquitous safety match box and makes humorous,punning play on the World Cup winning football team. Instead of spot the ball we are encouraged to spot the player: a challenge that reveals itself through a mix of instinct and educated guess work.

As England’s sole international triumph recedes back in time, so the nostalgic appeal of 1966 and the Sixties in general finds perfect expression through the emblematic image of the matchbox”

England’s Glory is available in a conservation  solid cotton core mount with a choice of black, painted off white and oak frames £235.00  https://churchgategallery.co.uk/product/matthewensor