Anthea Craigmyle’s childhood years were spent in the rambling old vicarage overlooking the Thames on Chiswick Mall, London. Growing up in a large family, she and her brother and sisters spent their time exploring the river, old warehouses, graveyards, and Chiswick Park.

With the onset of WWII, Anthea was shuttled between London and the country in an effort to protect her from the bombings, many of which she experienced whilst sleeping in the vicarage cellar amongst young Jewish refugees and neighbours.
Anthea had the good fortune to be taught by two remarkable teachers: first, Mrs. Henry Moore and then later, Kathleen Richardson. It was Kathleen Richardson who nurtured Anthea’s growing capacity for visual description from imagination. Kathleen would enter the art classroom and would describe a scene spotted on her journey from Oxford. “Paint that!” she would announce to the class as she popped a few inspirational Cezanne or Giotto postcards around the room. This was the beginning of the powerful, pictorial story-telling essence so vivid in some of Anthea’s paintings.
When she went to the Chelsea School of Art, at age 17, Anthea was taught by Ceri Richards, Julian Trevelyan, and others.

She has exhibited at Sally Hunter’s, the Russell Gallery, Thompson’s of Marylebone, as well as at mixed exhibitions and one-man shows at the New Grafton Gallery.
Anthea frequently visits and paints the West Highlands. She also seeks inspiration from the Thames, animals, boats, London gardens, as well as interior spaces. The clean, romantic quality of her work is evocative both, immediately for what they show the eye, and more subtly in a dream-like, mystical way for what lies beyond.

“I see everything in pictures. The muddle or chaos of war and indeed of war-lives means, I think, that I’m always trying to create order.” 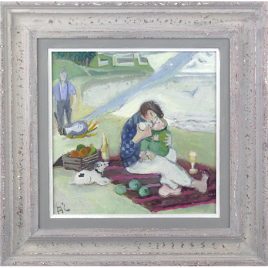 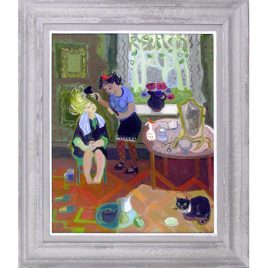