With so many different techniques, the terminology around printmaking can be confusing for anyone who isn’t a printmaker! That’s why we have put together this glossary of terms to help you when choosing an original print to add to your collection.

WHAT IS AN ORIGINAL PRINT?

An original print is not a reproduction print, it is a print that is manually printed onto paper by the artist from an image they have created on a plate, block or screen. Because of the hand printing method used, no two prints are competely identical, with small variations occuring.

A limited edition is when the artist decides how many prints will be made from a plate or screen. The number of prints can vary greatly, and is determined by the choice of the artist as well as the method of printing used. some methods such as etching create a much more durable plate which can create a large number of prints, whereas a collagraph plate may be more delicate or made from perishable materials. The size of the edition can also effect the price of the print.

The number of prints being limited makes original prints collectable in a way that reproduction prints may not be. Usually along with their signature the artist will write in pencil below the print the number of the print and the size of the editions, such as 2/50.

Along with the limited number of prints, the artist may also create ‘Artist’s Proofs’ which can number up to 10 percent of the edition size. These may be extra copies for the Artist to keep for themselves, a proof of the plate at an unfinished stage or prints that differ from the edition, such as printed with a different colour of ink. 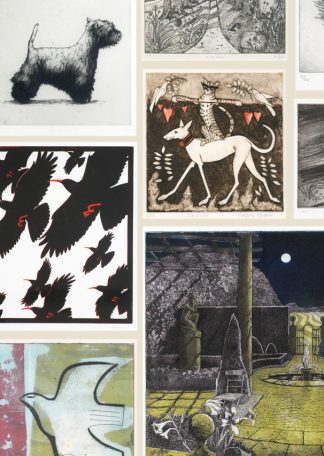 Monoprinting is a simple yet incredibly versatile technique which involves the artist applying ink or paint directly to the ‘plate’ (which can be made from any smooth flat material, such as plastic, glass or metal). The paper is then applied to the plate, and either manually pressed down or put through an press to transfer the ink to the paper. The arist may only print onto the paper once, or print multiple times to create a complex, layered image. They may also use different colours of ink to create a painterly look.

Because the artist paints the image on to the plate, only one print can be made, meaning it is 1 of an edition of 1.

To create a linocut or woodcut print, the artist carves their image into a piece of lino or wood, leaving raised areas that will take ink. The inked block can be printed either by hand or with a press. This technique is particularly suited to making bold, graphic prints with flowing lines, but can also be used to make intricate prints with fine details.

Creating a etching involves a metal plate, which is covered with a layer of wax. The artist then draws on the plate by scratching away this wax with a pointed etching needle. The plate is then dipped into a bath of acid, which dissolved the exposed areas of metal where the wax has been scratched away. The remaining wax is then removed from the plate, and ink is applied.

The artist then used a rubbing technique to wipe off the plate the leave ink only in the etched lines. Paper is then applied to the plate and run through an etching press to transfer the ink to the paper, creating the finished etching. Even after printing, the plate can be re-covered in wax and etched again, making etching particularly suited to creating very finely detailed images.

Etched plates are also durable, meaning they can be used to print large editions.

Aquatint is an etching technique used to create areas of tonal variation on the plate. Powdered resin is sprayed onto the plate and heated so it aderes evenly, creating a fine acid resistant coating. Once dipped into the acid bath, areas covered with less of the resin will have been more eroded and so will appear darker in the final print, and areas covered with more of the resin will have been less eroded and so will appear lighter in the final print. This allows the artist to create areas with a smooth gradient between light and dark.

Etching and aquatint techniques can be used on the same plate, to create a finished artwork with both lines and areas of graduated light and shadow. Alternatively, two (or more) seperate plates can be used to create an image with colour as well as black and white.

Like etching, drypoint involves creating in image on a metal plate, however rather than the lines being etched by acid, they are created by scratching directly onto the surface of the plate. The ink is held in the scratched lines and the raised ‘burr’ at the edges of the lines, creating a finished print with much softer lines than an etching. Because the delicated raised wear away with repeated printing, drypoint is only suitable for printing  smaller editions.

Photogravure is a photographic printmaking technique, whereby a metal plate is coated with a light sensitive gelatin tissue that has been exposed to a film positive. The gelatin with the most exposure to the light hardens, onto the plate, which is then etched in acid. The plate is then inked like an etching plate, and run through a press. This technique can be used to make prints which accurately recreate the tonal variations in the original photographic film.

Wrench, Scratcher Awl and Dividers from the series ‘Portrait of my Father by John Douglas Piper

Screenprinting is an versatile technique, using a mesh screen, aslo known as a ‘slilkscreen’ as a kind of stencil to print onto paper or fabric. Like a stencil, areas of the screen are blocked off by painting on glue, laquer or sticking paper to the screen. Ink is then pushed through the screen onto the paper using a rubber  squeege. Screens can also be made by covering the mesh in a light sensitive emulsion, laying a transparency into the screen and exposing the screen to light, hardening the areas reached by the light.  The areas blocked from the light can then be rinsed off, and prints made. Screenprinting is good for printing bold images with a single colour, as well as more complex images with areas of gradient and multiple colours. It is also suited to making large scale prints.

Lithography works on the principal that oil and water repel each other. The artist draws directly onto a limestone block with a greasy substance, such as special wax crayons or paints made for lithography. The slightly porus surface of the limestone absorbs this greasy substance and holds it. The stone is then moistened with water, and oil based ink is rolled onto the stone. The water acts as a barrier to the ink, allowing it to be wiped off, with the ink only remaining on the greasy areas where the artist drew their original image. The Image can then be transferred to paper in a printing press.

Lithography can also be adapted to high volume reproduction printing using aluminum, polyester, or paper printing plates are used instead of stone tablets. 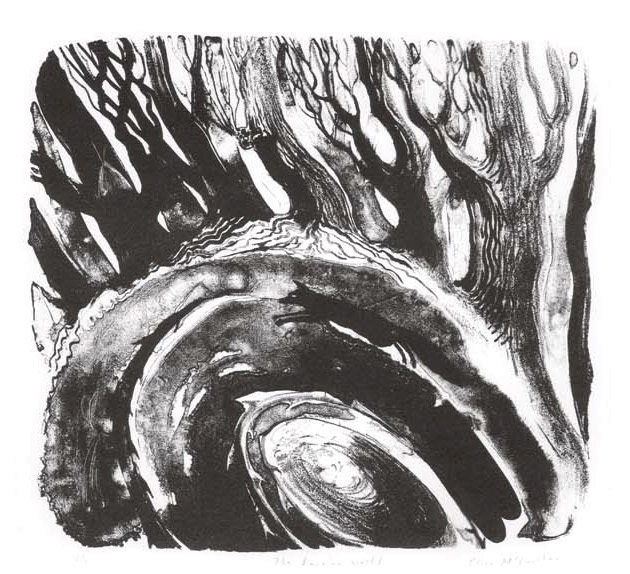 The Turning World  by Flora McLachlan

Collagraphy is a process where the artist applies collage materials, acrylic texture mediums and other substances like carborundum to a rigid plate such as cardboard or wood . This creates a highly textured surface that can be used to hold ink and create a print onto paper, either by hand or by using a printing press. Collography is an incredibly versatile technique, as there are few limits to what the artist can use to create the plate.

Original prints are a fantastic way to start building your collection, as they original pieces but often cost less than an original painting. If you would like to see some of the original prints we exhibit, you can browse online or visit us, as we always have prints on display in or Porlock Gallery.

Original prints are eligible to be purchased using Own Art, an Arts Council supported scheme that allows you to purchase an artwork by spreading the cost interest free over 10 monthly payments.

Find out more about Own Art >
Browse available Original Prints>